Grandstand, top of north and Kop 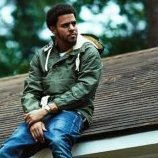